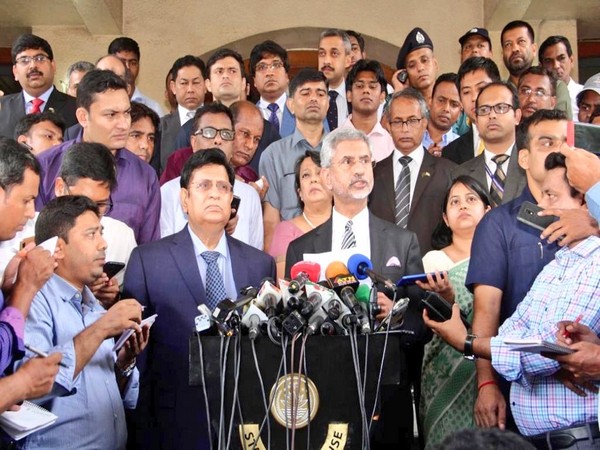 After a meeting with his Bangladesh counterpart AK Abdul Momen, External Affairs Minister S Jaishankar on Tuesday said there is “no change” in India’s position on the proposed Teesta water-sharing agreement between New Delhi and Dhaka.

“We have a position. We have a commitment to that position. There is no change,” he told the media after his meeting with Momen at the state guest house Jamuna, reported Dhaka Tribune. Sharing of water of the Teesta River, which originates from Sikkim and flows through West Bengal to merge with the Brahmaputra in Assam and Jamuna in Bangladesh, is the most contentious issue between New Delhi and Dhaka. While Bangladesh has demanded 50 per cent of the river’s water supply from December to March, India has claimed a share of 55%.

Previously, the Teesta water agreement was slated to be inked between the two countries on September 6, 2011, during the visit of former Indian Prime Minister Manmohan Singh to Dhaka. But the proposed deal was called off after repeated objections by West Bengal Chief Minister Mamata Banerjee. The water-sharing issue was once again discussed during Prime Minister Narendra Modi’s visit to Dhaka in June 2015. Modi had assured his Bangladeshi counterpart, Shiekh Hasina, that the waters of the river would be shared while looking forward to achieving a quick resolution to the issue.

Jaishnakar, who is on a three-day visit to Bangladesh, held “fruitful interaction” with Momen on a wide range of bilateral issues including Rohingyas and Bangladesh Prime Minister Sheikh Hasina’s upcoming visit to New Delhi in October. The External Affairs Minister said India is looking forward to host her. Jaishankar described Bangladesh-India relations as a model for other South Asian countries.

“Speaking to the media after the bilateral discussions #JamunaGuestHouse, EAM @DrSJaishankar said that he had a fruitful interaction with Foreign Minister H.E. Dr. @AKAbdulMomen and that #India is looking forward to host Prime Minister H.E. Sheikh Hasina in #NewDelhi in October,” the Indian Embassy in Bangladesh tweeted.

While speaking on the issue of Rohingyas, Jaishankar said Bangladesh and India have agreed upon their “safe, speedy and sustainable return” to Myanmar.More than 700,000 Rohingya fled Myanmar’s western Rakhine state after a military crackdown that started in August last year. Many of them entered Bangladesh and are living there since then. Jaishankar is scheduled to meet Hasina. Indian High Commissioner in Dhaka, Riva Ganguly Das, will be hosting a private dinner for the minister tonight.

The new external affairs minister was replying to questions at a joint briefing with his Bangladesh counterpart AK Abdul Momen at the state guesthouse Jamuna in Dhaka after bilateral talks on Tuesday.

Before the meeting, the foreign minister visited Bangabandhu Memorial Museum at Dhanmondi-32 and paid tributes to Bangladesh’s Father of the Nation Bangabandhu Sheikh Mujibur Rahman by placing wreaths at his portrait there.

S Jaishankar, who arrived in Dhaka on Monday night on a three-day official visit to Bangladesh, said the two countries can take the relationship to the next level.

Rohingya repartition is in ‘national interest’

On Rohingya issue, Jaishankar said they agreed that the “safe, speedy and sustainable” return of Rohingyas to their place of origin in Rakhine State is in the national interest of the three countries — Bangladesh, Myanmar and India.

We reaffirmed our readiness to provide more assistance for the displaced persons in Bangladesh and to improve the socioeconomic condition in Rakhine State, he said.

We look forward to making a progress to find mutually acceptable formulas to share water from our 54 shared rivers, he told reporters adding that they are ready to make a start wherever it is possible.

Asked about long-pending Teesta water-sharing matter, Jaishankar said there has been no change regarding their commitment to resolve the issue. We have a position. You all are aware of it. We have a commitment on that position. And there’s no change in that regard.

Jaishankar said India’s partnership with Bangladesh remains an example of what neighbours can do if they work together.

He said the Narendra Modi government is determined to ensure that this partnership is truly a role model in South Asia and for the world.

The minister said the Indian government would like to offer all possible support to realise Bangladesh’s development agenda which is in India’s interest as well.

Claiming that the ties between two nations were currently in golden age, he said India and Bangladesh will benefit mutually if the partnership grows.

Jaishankar said the two countries have a very important shared history and they look forward to sharing Bangladesh’s celebrations of birth centenary of Father of Nation Bangabandhu Sheikh Mujibur Rahman and 50th anniversary of Bangladesh’s independence in 2021.

On trade issues, Jaishankar said they are ready to move to the next stage of economic partnership as Bangladesh’s economy develops and matures. We’ll make progress at a phase which is comfortable for Bangladesh.

On people-to-people contact, he said the largest consular operation of India is now in Bangladesh and they are very proud of that.

The foreign minister is scheduled to meet Prime Minister Sheikh Hasina at her official residence on Tuesday. Indian High Commissioner in Dhaka Riva Ganguly Das will host private dinner for Jaishankar. He will leave Dhaka for Kathmandu on Wednesday morning. ( India T0day/ ANI)