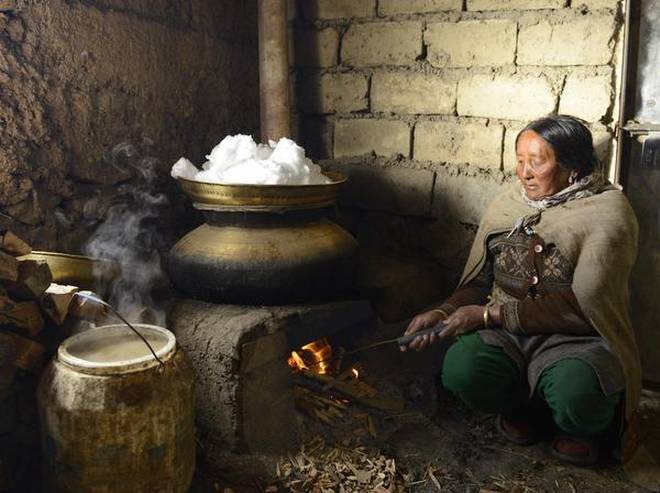 What’s brewing up the Himalayas

For the Himalayan folk, their drinking sessions are as important as their daily prayers. This spirited ritual always begins by offering a few drops of their drink to their Gods and ancestors.

A lot of precision and patience, care and a keen sense of timing go into the preparation of their blends. It takes several months of drying, smoking, fermenting and filtering before it is poured into a bamboo shoot, sipped with a bamboo pipe or into a simple glass to be consumed. Served at room temperature, these brews leave behind sweet, malty and spicy memories on the palate.

Every community in the Himalayan region has its own unique intoxicant, a concoction made from fermented rice, barley or millet, sometimes mixed with herbs and sometimes not. The Adis of Arunachal Pradesh relish their Apong, a local rice beer with different flavours. The Chang, ‘hot beer’ made by fermenting millet, using yeast is Sikkim’s heartbeat.

‘Soor’, the most celebrated elixir, overflows at every communal gathering of the Jaunsaris and the Parvatis of the Tons Valley in Uttarakhand. It is made from keem, a cake prepared from the roots, leaves and flowers of the local florae combined with fruit pulp, barley or finger millets and kept aside to ferment after which the distilled ‘soor’ is collected in a pot. For the Himachali, it is ‘Lugdi,’ a very crude local beer that is made from sour barley or rice. The sweet-sour frothy beer ‘Chhang’ presides over every function in Ladakh and is famous among the people of Sikkim too.

Dried wild apricots and apples are used in the transparent ‘Chulli,’ very popular among the Kinnauris. The enophiles of the Ribbu region of Kinnaur adore their ‘Anguri’ a potent wine made from red and green grapes.

Araq is a favourite among the simple mountain people of the Spithi Valley. The boiled rice or barley, stored in huge containers for many months is mixed with water. After another month, some of this Chang is taken in a big vessel inside which another vessel is placed to collect the araq through a process of condensation. It is covered with yet another hollow vessel, which is filled with chunks of ice and kept over a low flame for nearly three hours.

The alcoholic beverages of the Himalaya have medicinal properties as well. Besides keeping the body warm, they are a great cure for cold related ailments and fever.

by J. Ramanan and Vrinda Ramanan

The writers are ace photographers known for their travelogues,