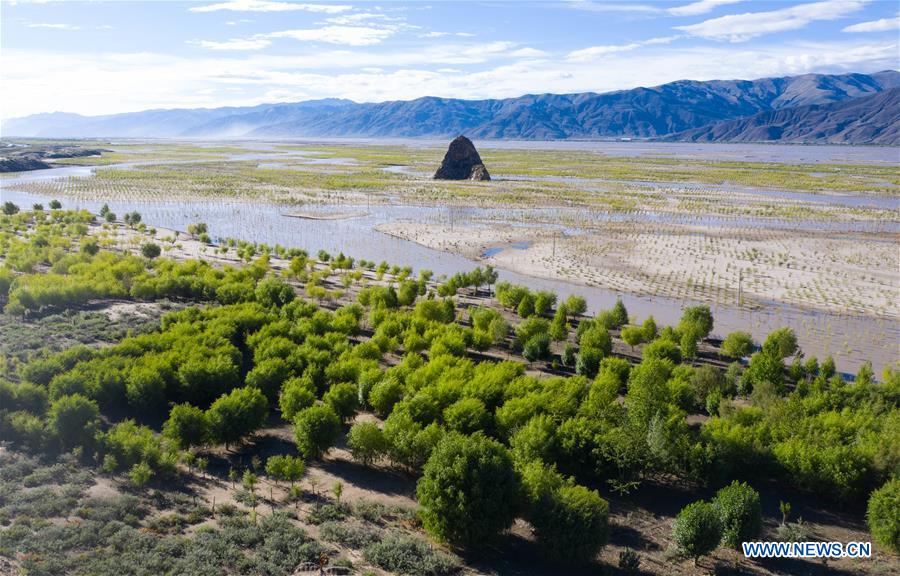 Aerial photo taken on July 16, 2019 shows trees planted along banks of the Yarlung Zangbo River in southwest China’s Tibet Autonomous Region. Tibet has seen significant progress in restoring biodiversity, with a forest coverage rate of 12.14 percent, said a white paper released in March this year by China’s State Council Information Office. The population of Tibetan antelopes has grown from 60,000 in the 1990s to more than 200,000 and Tibetan wild donkeys have increased in numbers from 50,000 to 80,000, noted the document, titled “Democratic Reform in Tibet — Sixty Years On.” Since the Qomolangma Nature Reserve was established in 1988, Tibet has set up 47 nature reserves of all kinds, including 11 at state level, with the total area of nature reserves accounting for more than 34.35 percent of the total area of the autonomous region, the white paper said. Tibet has 22 eco-protection areas, including one at state level, 36 counties in receipt of transfer payments from central finance for their key ecological roles, four national scenic areas, nine national forest parks, 22 national wetland parks, and three national geoparks, figures showed. The central government has continued to increase eco-compensation for Tibet in return for its cost for protecting the eco-environment and the consequent losses in development opportunities. The white paper said that since 2001, the central government has paid 31.6 billion yuan (4.71 billion U.S. dollars) in eco-compensation to the autonomous region for protecting forests, grassland, wetland, and key ecological reserves. (Xinhua/Purbu Zhaxi)