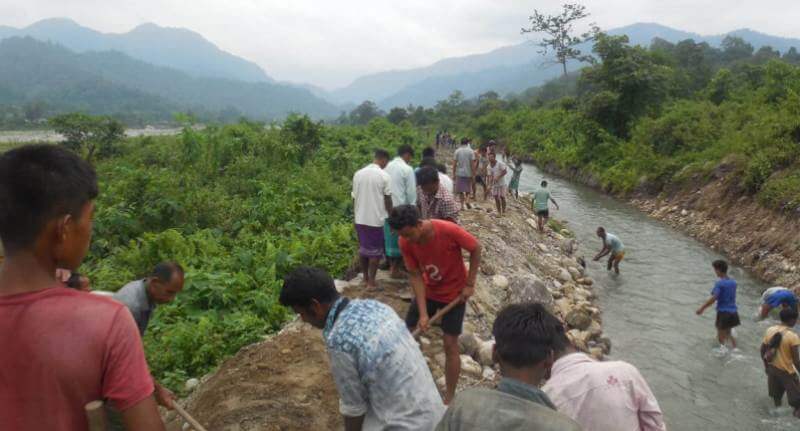 For centuries now, people living on the foothills of Bhutan have been dependent on rivers and rivulets flowing down from the mighty Himalayas. The sharing of water and other natural resources has been much dependent on the geo-political climate between the two countries.

Fortunately, the diplomatic relations between the Government of Indian and Royal Government of Bhutan have always been cordial except for localized conflicts in different border areas. Taking positive advantage of the congenial atmosphere between the two countries, NERSWN (North East Research and Social Work Networking), a Kokrajhar-based civil society organization, has been mobilizing communities on both sides of the Indo-Bhutan border along the Saralpara-Sarphang area to participate in sustainable sharing and governance of the trans-boundary river — Saralbhanga.

As part of the similar endeavour, more than 500 people from 36 villages of Saralpara area participated in the voluntary work to repair the traditional diversion-based irrigation system, which the locals call ‘Jamfwi/Dong’. During the ‘shramdan’ work, one of the members of the Irrigation Committee, Amarsingh Iswary said, “We are so grateful to our neighbouring country Bhutan that they have always been kind enough to allow us to draw water from Saralbhanga/Swrmanga River. This irrigation canal is the lifeline for more than 15,000 farmers in the Saralpara area alone. If the flow of water stops in this Jamfwi, we will have no option but to migrate or perish.”

The general secretary of the Irrigation Committee, Matla Mardi said, “The Saralbhanga River is the lifeline for human beings, wildlife, flora and fauna and all the living beings in Ultapani Ripu Chirang Reserve Forest. One cannot imagine life without the flow of water in this Jamfwi. We feel so fortunate that people here have become organized due to the active mobilization of NERSWN to further develop this trans-boundary irrigation system.”

The South Asian region, including India, has already started witnessing the impacts of climate change. The 2017 floods had a devastating impact in the region. India alone had a casualty of 1,046 people. Climate change-induced disasters have wider impacts and are affecting multiple countries. The ever-increasing frequency and intensity of disasters have already overwhelmed capacities of countries to respond. The regional fragilities have increased manifolds and water stress and its impact on riparian livelihoods is also an emerging problem.

There are several rivers that flow down from Bhutan to India; 56 such rivers flow down from Bhutan to Assam itself. Though these rivers are the lifeline for riparian communities in both the countries, many a time these rivers wreak havoc with flash floods, long-term inundation, erosion, cyclone and siltation. Unscientific mining, unsustainable fishing and improper water management and flood protection measures can be the determining factors for cumulative risks and vulnerabilities in the region. These rivers if governed effectively can help both the countries thrive in trade and tourism and also lead to prospering livelihood among the riparian communities.

Historically, Bhutan and India always enjoyed a friendly and cordial relationship. Both the countries exchange goods and goodwill through different established gateways called ‘Dooars’. Formal diplomatic relations between India and Bhutan were established in 1968 with the establishment of a special office of India in Thimphu. Before this, India’s relations with Bhutan were looked after by the Political Officer in Sikkim. The basic framework of India- Bhutan bilateral relations was the Treaty of Friendship and Cooperation signed in 1949 between the two countries, which was revised in February, 2007.The India-Bhutan Friendship Treaty not only reflects the contemporary nature of relationship but also lays the foundation for their future development.

The golden jubilee of the establishment of formal diplomatic relations between India and Bhutan was celebrated in the year 2018. In addition to the bilateral diplomatic relations, people-to-people ties through exchanges in the form of culture, goods and services also have been cordial between the citizens of both the countries.

Pratibha Brahma, a renowned social activist said, “Our efforts to bring together the two friendly nations for meeting the developmental aspirations of people living along the Indo-Bhutan border are bearing fruits. People-to-people ties are facilitating cordial sharing of natural resources, especially water on the border area. The Saralpara initiative for trans-border river sharing is one of the best things that I have ever seen in my life.” 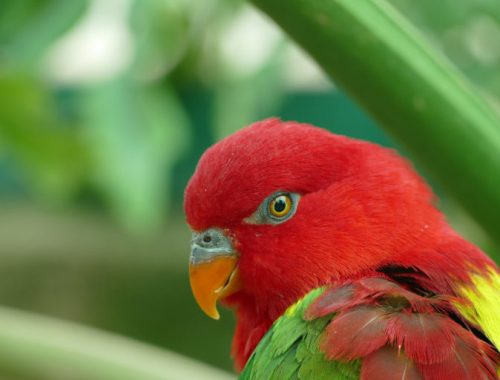 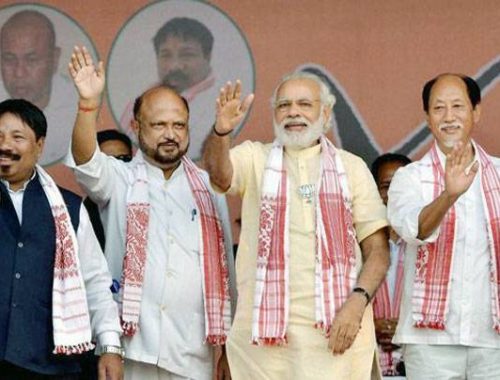